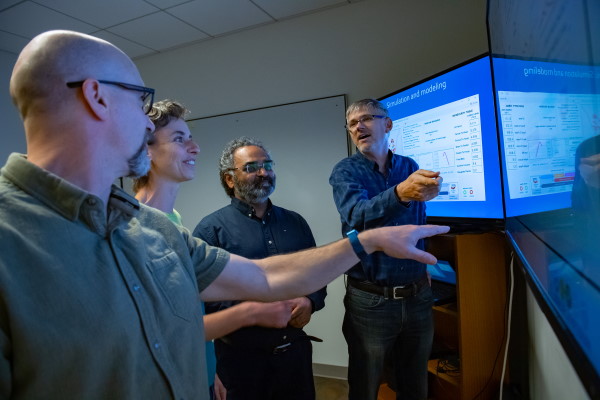 A multi-disciplinary team of researchers representing the University of Vermont, the University of Rhode Island, the University of Delaware, and Colorado State University has published a study that may help create environmental policies that more effectively address pollution in our nation's most critical waterways. The study considers human activity in watersheds such as Lake Champlain, Delaware Bay, and the Chesapeake Bay. It seeks to understand how people balance their selfish and altruistic instincts when asked to account for the environmental impact of their actions in such watersheds. What mix of environmental data, economic incentive, and regulatory penalty will motivate people and businesses toward the actions that best balance the economic and environmental health of the region?

The study, funded by the NSF EPSCoR Program, is titled “Characterizing Heterogeneous Behavior of Non-Point Source Polluters in a Spatial Game under Alternate Sensing and Incentive Designs.” It has been published in the American Society of Civil Engineer's "Journal of Water Resources Planning and Management," and offers those experts some surprising information on how people might react in the face of management policies.

The science of understanding the health of our waterways has reached remarkable levels. Researchers can deploy increasingly sophisticated sensor technology to gather data any nearly any point in a watershed system. And they can analyze that data to gain finer and finer levels of detail regarding the pollution affecting those waters.

The team, composed of researchers in policy sciences, applied economics, statistics, natural resource economics, and plant & soil science, drew on their collective expertise to design a game that might shed light on that behavior. Economists have long used decision game theory to allow them to understand how people might react in certain scenarios. Economist John Nash, whose life was profiled in the film "A Beautiful Mind," won his Nobel Prize for his work in this area, and indeed, this team used the "Nash Equilibrium" as a foundational element of their analysis.

In this game, volunteers were cast in the role of farmers whose fields lie next to each other along a common river. In successive rounds of the game, they were given varying amounts of monitoring data about the pollutants running from their fields and into the river. And they were presented with the set of economic incentives or penalties they could expect if they were found to be in compliance with or in violation of pollution limits. And then they were set free to make their production decisions for that round.

After numerous rounds of the game, the researchers ran game theory and statistical analyses on the decisions made, and the results defied what one might expect to be the obvious choices. For example, more sensors placed in the river, yielding more specific data for each farmer, did not alter their production choices in the way that might be expected. Less monitoring from differing spots along the river, it turns out, more effectively reduced the farms’ combined pollution. And the mix of incentives and penalties, when mixed with those differing levels of pollutant information, also showed unexpected results.

The game was played with farmers as the key actors, but the researchers point out that the lessons learned can be extrapolated to many other forms of economic activity. Regardless of the industry, the decisions people in a watershed make are highly nuanced, and less obvious than might be expected. Better understanding of those decision patterns has significant implications on the resources that researchers and policy makes chose to marshal in creating effective and efficient environmental policies. “Sensors do not by themselves provide panaceas to complex watershed management issues,” says Professor Asim Zia, the lead author of this study from the University of Vermont, “yet minimal investments in environmental sensing combined with revenue-neutral policies in the form of taxes and subsidies may provide the greatest bang for the buck to reduce nutrient pollution in rivers, lakes and estuaries without hurting the economic bottom-line of farmers.”

Vermont EPSCoR was awarded a new Research Infrastructure Improvement (RII) Track-1, $20M award on June 1, 2016 for research on Lake Champlain Basin Resilience to Extreme Events (BREE). The research aims to inform public policy and support economic and workforce development. Research questions examine what makes some parts of the Lake Champlain Basin and its watersheds resilient in the face of extreme weather events, increasingly common in a warming Vermont, while other parts fail to recover and rebound. The award from the National Science Foundation will help answer those questions, providing much needed information to decision-makers as they govern the basin and develop policies that reach far into the future. The five-year project will support research teams from UVM and colleges across the state that will collect data from sensors in streams, soil, and the lake.